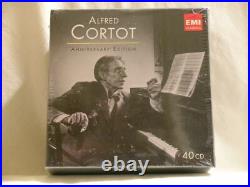 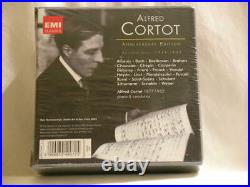 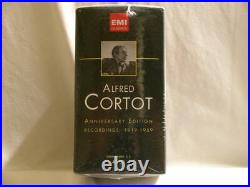 To be sure, it is not quite The Complete Cortot. For example, the collection omits Cortots 1903 sessions accompanying soprano Felia Litvinne, plus a 1925 recording containing the second half only of Chopins First Ballade coupled on shellac with the same composers Second Impromptu. There is no broadcast material, either. However, we do get Cortots unpublished 1957 Chopin Preludes and Ballades, along with a few samples from the pianists long-rumored, unfinished Beethoven cycle recorded at the Ecole Normale in 1958/59.

He first 29 CDs present solo and concerto recordings in more-or-less chronological order. Discs 1 through 3 feature Cortots complete American and British acoustic sides, followed by the 1925 electrical American sessions. Discs 4 through 9 cover the rest of the 20s and early 30s when Cortot set down his first versions of Schumanns Carnaval, Symphonic Etudes, and A minor concerto, Francks Symphonic Variations, Chopins Preludes, Ballades, Sonatas Nos. 2 and 3, Debussys Preludes Book 1 and Childrens Corner Suite, plus his only recordings of Ravels Sonatine and Liszts B minor sonata (the latters first commercial recording). The 1933-39 Abbey Road sessions dominating discs 10 through 17 arguably constitute Cortots strongest recordings. Little can be added to years of praise heaped upon the Chopin Preludes, Etudes, Fantasy, and Barcarolle his overwrought Chopin Waltzes succeed less, despite rapturous individual selections like the C-sharp minor and Op. 60 A-flat, plus Schumanns Kinderszenen and Kreisleriana.

Cortot is off form in Ravels Left Hand Concerto, but his 1939 Weber Sonata No. The French 1942/43 Chopin Etudes, Preludes, and Waltzes take up discs 18 and 19. By and large they are less technically secure than their Abbey Road counterparts, and relatively dry in ambience. Discs 20 through 29 cover Cortots uneven postwar output. Experienced Cortot acolytes will find it easier than general audiences to listen beyond the technical flaws to appreciate what the aged pianist still could muster.

And there are a few jewels among the late recordings, like the 1949 Chopin Berceuse and Op. 45 Prelude, Schumanns Vogel als prophet, and Cortots own transcription of Schuberts Litany. While Cortots fingers are often taxed in his 1952 Japanese sessions, he still manages a surprisingly assured Liszt Second Rhapsody. Discs 30 through 37 showcase Cortots prowess as a chamber player, conductor, and song accompanist. His classic collaborations with Jacques Thibaud and Pablo Casals are justly familiar and celebrated.

Modern ears probably will wince at the Bach Brandenburg Concertos, with their humongous cadential ritards and frilly portamentos. Still, Cortots mad dash through the Fifth Concertos elaborate cadenza counts among the most exciting piano recordings ever made, complete with those cheeky added octaves in the 32nd-note runs! The Debussy song recordings with Maggie Teyte and the Schumann Dichterliebe with Charles Panzera reveal Cortot to be a sensitive, highly attuned collaborative pianist who still maintains a high profile.

No doubt collectors will be most curious about the newly published Beethoven cycle excerpts. In addition to the music, Cortot apparently taped commentaries for each sonata, with piano illustrations. Here we have lecture-demo versions of the Moonlight, Pathétique, and Appassionata sonatas, Op.

81a (Les Adieux), and Op. 90, plus several music only examples: Op. 90s second movement, and all three Op. Its obvious that the music is in Cortots blood, if not consistently in his fingers. I like the walking pace and eloquent simplicity he brings to the Les Adieux slow movement, in contrast to many of todays ponderous readings.

There are beautifully shaped snippets from the Pathétiques first-movement introduction and the Moonlights famous Adagio sostenuto, while the Appassionata excerpts organic flow and inner drama make me regret that Cortot did not record this warhorse in his prime. Furthermore, both Cortots voice and piano are excellently engineered. We can NOT bear responsibility for packages lost or damaged by the Postal System. If you do not agree with this Please DO NOT. Grading is visual only unless otherwise stated.

I go by Goldmine standards and try to be conservative. I will play grade on certain items only - it is just impossible for me to play grade everything I put on EB. MINT means factory sealed, never opened or played. NM is opened but in visually brand new, out-of-the-packaging clean condition. Its a grade above VG. + and below Near Mint - it does not imply perfect. Gy Scratches are feeler type and Scuffs are just cosmetic and. And due to the nature of sound recorded products that can be easily copied. If item is truly defective the. Replaced with First Class International (FCI) which is suppose. Also, FCI cannot be tracked. Ty if they select FCI. Any package over 4 pounds. Media and Priority still in effect in US. / South America/ Australia/ etc.

All other combinations are actual weight and can only be provided after packing. The item "ALFRED CORTOT Anniversary Edition EMI SEALED 40 CD Box Set" is in sale since Monday, December 9, 2019. This item is in the category "Music\CDs".

The seller is "ward1935" and is located in South Plainfield, New Jersey. This item can be shipped worldwide.