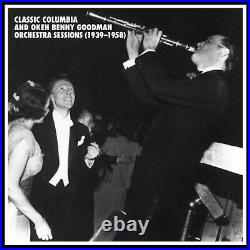 BRAND NEW - OUT OF PRINT 7-CD BOX SET. His quicksilver tone, his insistent drive to swing the music, his ability to execute cleanly the most dramatic filigrees of passages all these qualities made him one of the most imitated instrumentalists in the world.

Of Jazz Studies, Columbia Univ. The Swinging Sound Of Benny Goodman You see it again and again in music - a new generation rushes the dance floor, pushes their parents to the wall, and suddenly it's their turn. There's a new sound.

It's also the story of swing, and it's king, Benny Goodman. The name alone evokes a completely different era in popular music and jazz. His remarkably fluid concept on the clarinet took jazz improvisation a step in a new direction from that of his influences, Jimmie Noone and Leon Roppolo. You could hear it as far back as the late 20s and early 30s when BG was an apprentice with the bands of Ben Pollack and Ted Lewis as well as the countless studio sessions he did for a variety of band leaders.

Try to describe the Goodman sound? The big band he organized for the Let's Dance radio program over NBC in New York eventually matured into the locomotive that barreled through the country to its famed and often told moment of discovery and success at the Palomar Ballroom in Los Angeles. The band delivered to the youth of America a new voice that was hot, cool, progressive and inventive. The set features more than 24 tracks that are being released for the first time.

These recordings represent the second stage of Goodman's career. With the disarming of the early band of which Harry James, Gene Krupa and Jess Stacy were such an intregal part, coupled with the loss of the Goodman Trio and Quartet with Krupa, Teddy Wilson and Lionel Hampton, this marked the end of an era. Leaving the Victor label, Benny joins Columbia and presents some new and old faces: Lionel Hampton, Ziggy Elman, Charlie Christian, Arthur Bernstein, Lou McGarrity, Stan Getz, Jimmy Maxwell and what was once big news - Benny luring Cootie Williams away from the Ellington band. However, possibly the greatest change in the band was in the arranging department. The man whose charts were a springboard to the early success of the BG band, Fletcher Henderson, is still churning out great arrangements.

Yet it was the work of both Eddie Sauter and Mel Powell whose young, fertile ideas were a challenge to both Benny and the band and made for some of the Swing Era's most durable sounds. We've decided to focus on this set of Goodmania, the instrumental big band sides for Columbia and OKeh. There are a few vocals but these are the instrumentals that although eclipsed commercially by Benny's contemporaries - Harry James, Glenn Miller, the Dorseys and Artie Shaw - they are nonetheless Olympian examples of big band swing. The item "BENNY GOODMAN MOSAIC CLASSIC COLUMBIA & OKEH ORCHESTRA SESSIONS 1939-1958 NEW" is in sale since Saturday, June 30, 2018. This item is in the category "Music\CDs".