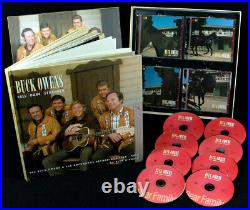 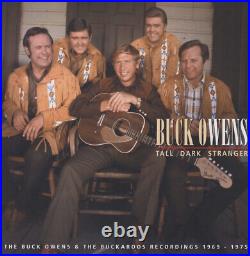 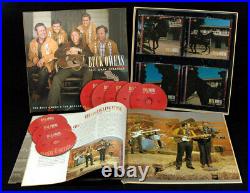 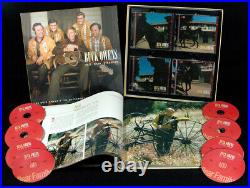 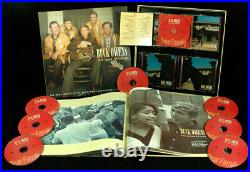 Tall Dark Stranger (8-CD Deluxe Box Set). 8-CD Boxed Set (LP-Size) with 108-page hardcover book, 214 tracks. THE WAY IT WAS IN'69... This 8-CD set chronicles every existing recording from Buck Owens' last years with Capitol Records. Every week he was on the hugely popular'Hee-Haw' TV show, his concerts were sell-outs, and he was building a business empire in his adopted hometown, Bakersfield, California.

He recorded at his own studio and fans across the country had an insatiable appetite for his raw voice, his clever, snappy songs and the band's minimalist twang. It was success on a scale that every singer dreamed of, but few ever got and fewer still could handle. During his last years on Capitol, Buck Owens tried to bring more variety to his sound.

Acutely aware of changes in pop music, Buck Owens admired rock bands' freedom to create and experiment with new and unorthodox sounds. This set includes a wider mix of styles than Buck had ever tried on record before.

There are over 20 charted hits, beginning with Tall Dark Stranger and ending with Buck Owens' exciting new version of The Battle Of New Orleans. In between are Buck Owens classics like I Wouldn't Live In New York City (If They Gave Me The Whole Dang Town), Bridge Over Troubled Water, Ruby, Rollin' In My Sweet Baby's Arms, Made In Japan, Ain't It Amazing Gracie, On The Cover Of Music City News, Monsters' Holiday, and the original version of Streets Of Bakersfield (later a #1 hit duet with Dwight Yoakam). This set also includes all the LPs, his bluegrass sessions, all the duets with Susan Raye, Buck Owens' son, Buddy Alan, and an amazing unreleased duet with R&B singer Bettye Swann. Plus all the Buckaroos' albums! Alongside the hits, there are many previously unreleased songs.... ALL THE WAY TO'75. I've Got A Happy Heart. Just A Few More Days.

My Savior Leads The Way. But You Know I Love You. Today I Started Loving You Again. I'm A Natural Loser.

The Biggest Storm Of All. If I Had You (By My Side). Down At The Corner Bar. Lay A Little Light On Me.

When The Roll Is Called Up Yonder. I'll Be All Right Tomorrow. Hurry Come Running Back To Me.

The Night They Drove Old Dixie Down. Take Care Of You For Me In Kansas City. Goin' Home To The Bayou. We Were Made For Each Other. I'd Love To Be Your Man. The Wind Blows Every Day In Oklahoma.

Bring Back My Peace Of Mind. When I'm With You. (It's A Long Way To) London Town. Let The World Keep On A Turnin.

I've Never Had A Dream Come True Before. Then Maybe I Can Get Some Sleep. I Thank Him For Sending Me You. I Don't Care (Just As Long As You Love Me). I Wouldn't Live In New York City If They Gav. No Milk And Honey In Baltimore.

The Wind Blows Every Day In Chicago. (It's A Long Way To) Londontown. The Devil Made Me Do That.

Everything Reminds Me You're Gone. Love Minus Zero - No Limit. It's Such A Pretty World Today. Rollin' In My Sweet Baby's Arms. I Know You're Married But I Love You Still.

One Of Everything You Got. All I Want For Christmas Is My Daddy.

It's Not What You Give. Good Old Fashioned Country Christmas. Christmas Ain't Christmas Dear Without You. Santa Looked A Lot Like Daddy. Santa's Gonna Come In A Stagecoach.

Too Old To Cut The Mustard. Pfft You Were (Was) Gone. You're A Real Good Friend. Tobacco White Lightning And Women Blues No.

I Won't Go Huntin' With You Jake But I'll Go. Cigareets, Whuskey And Wild, Wild Women. I'll Still Be Waiting For You. Daddy Frank (The Guitar Man). The Fightin' Side Of Me. The Legend Of Bonnie And Clyde. Ain't It Amazing, Gracie. You Ain't Gonna Have Ol' Buck To Kick Around. I Love You So Much It Hurts. A Whole Lot Of Somethin.

Get Out Of Town Before Sundown. In The Palm Of Your Hand. The Good Old Days (Are Here Again). I Know That You Know (That I Love You).

When You Get Back From Nashville. When You Get To Heaven (I'll Be There). She's Had All The Dreamin' She Can Stand. Your Monkey Won't Be Home Tonight.

Take A Taste Of My Wine. I Think I'm Going To Like Loving You.

All The Dreamin' They Can Stand. Let's Fall In Love. Love Makes The World Go Round.

Love Makes The World Go Around. I Won't Be Needing You. Someday I'm Gonna Go To Mexico. Colors I'm Gonna Paint The Town.

It Never Will Be Over For Me. Your Daddy Was A Preacher And Your Mama Was. (It's A) Monsters' Holiday.

I Wish I Was A Butterfly. All Around Cowboy Of 1964. Meanwhile Back At The Ranch. On The Cover Of The Music City News. You're Gonna Love Yourself In The Morning. Kiss An Angel Good Mornin.

Pass Me By (If You're Only Passing Through). 41st Street Lonely Hearts' Club. I Finally Gave Her Enough Rope.

Run Him To The Roundhouse Nellie. He Ain't Been Out Bowlin' With The Boys. It's Been A Long, Long Time. A Different Kind Of Sad.

You Don't Find Work In Pool Rooms And Love D. The Battle Of New Orleans. Dear customer, Based on our longtime experience, consignments to the U.

Canada, Africa, Australia, and South America may take up to three weeks, depending on the target country's custom clearance policy, and local deliverers. Such consignments are rather cheap but can not be tracked! Should you live in the U. Please, note that extra costs will apply.

You must request for this extra service, prior to sending any funds. Thank you very much for your attention and cooperation, your Bear Family Records team. This item is in the category "Music\CDs". The seller is "bear_family_records" and is located in this country: DE.