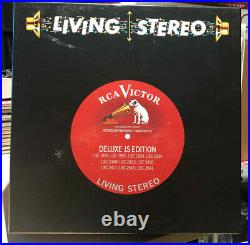 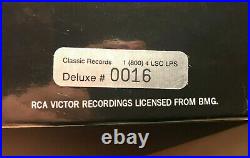 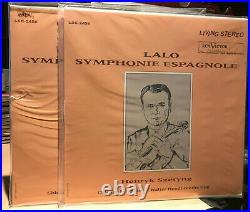 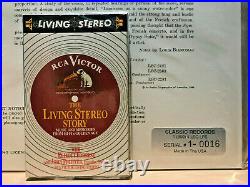 The LPs in this famous catalog are highly regarded and sought after. Many near mint original copies of these titles carry a very hefty price tag. These are just some of the reasons that Classic Records decided to pursue this catalogue and give these recordings the audiophile treatment.

It is so unfortunate that Classic Records no longer exists. The company did issue a multitude of titles that are considered by many to be the very best versions ever produced for the discerning listener. This is your chance to get one of the rarest gems from the Classic Records catalogue.

We are offering here the Deluxe 1S Edition Boxed Set - all factory sealed and MINT with a super low edition number of # 0016 - this is one of the first compiled sets made by the company. You may never have a chance at something like this again.

Numbered Limited Edition (# 0016) - one of the earliest first edition sets issued, all factory sealed, all in mint shape. A great opportunity to get a super rare, earliest version box - the LPs were all made with 180-gram vinyl (reported to be the very best sounding versions).

Beautiful and highly collectable box set release from audiophile label, Classic Records. Ten beautiful reissues of the famous RCA "Shaded Dog" Living Stereo titles (list below). All ten LPs are individually sealed and are in 100% MINT condition. On the back of the box itself, it has the Limited Edition Number, # 0016. Each of the individual albums also have the #1-0016 number on the back of each jacket. Number 16 out of only 500 pressed! All records in this box set were mastered by Classic Records at Half Speed from the original source master tapes. An all-analog, tube amplification process was used at every step.

Classic Records used a proprietary vinyl that guaranteed virtually no surface noise and sonically superior dynamics. Classic Records pride themselves for releasing each album with the original artwork, LP labels and any other materials which were included with original pressings. Box is in mint condition...

Nice sheen to the lamination, sides are rigid and corners are sharp. Box itself came unsealed, but all records inside are sealed individually and are all in 100% MINT condition.

Issued in 1994 - this was a limited edition of 500 sets for worldwide sales. There was a problem with one of the records in the initial release, LSC 2456 Lalo Symphony Espagnole / Szeryng.

I dont recall what the specific issue was, but Classic Records replaced this LP with another copy. We are also including a factory sealed cassette tape titled, RCA Victor - The Living Stereo Story with this set. Albums in the box set include: 1. LSC 1806 - STRAUSS Also Sprach Zarathustra, Fritz Reiner Conducts The Chicago Symphony Orchestra. The legendary 1954 Reiner/CSO performance recorded directly to two track analog by Jack Pfeiffer, who oversaw the Classic transfer of one of his favorite recordings and hailed the Classic reissue as definitive and spectacular. LSC 1900 - BERLIOZ Symphonie Fantastique. The legendary 1954 performance that was never issued as a Living Stereo.

By the time that RCA started issuing stereo LPs in 1960, Munch re-recorded the piece, though many argue that the 1954 performance is favored. This is one of the early Jack Pfeiffer two-track recordings which capture that sense of "being there"that is often elusive. LSC 1934 - BARTOK Concerto for Orchestra.

Fritz Reiner Conducts The Chicago Symphony Orchestra. Reiner, being as close to Bartok as he was, knew this work "inside and out" and committed a performance for the ages in this session. Recorded October 22, 1955 in Orchestra Hall, Chicago. LSC 2234 - SAINT-SAENS Piano Concerto #2 & FRANCK Symphonic Variations. Alfred Wallenstein Conducting The Symphony Of The Air.

Arthur Rubinstein had performed Saint-Saens Piano Concerto No. 2 in G minor, Op. 22 many times throughout his concert career; in fact, this was one of the pieces on the program of his first public concert given in 1900. The style in which he plays it is simply captivating. It's not a serious concerto in the German-school, but rather a light hearted and somewhat amusing concerto.

This is probably the most famous recording of the composition, and it's no wonder why. LSC 2398 - KABALEVSKY Comedians Suite & KHACHATURIAN Masquerade Suite. The violin is so sweet and full of rosiny texture here.

The whole string section is full of Living Stereo magic. The sound stage is wide and deep, the overall sound rich and warm. The mid-range is nothing short of magical. This is the kind of Golden Age recording that makes audiophiles lose it.

It's one of the few legitimate reasons to take the TAS Super Disc List seriously in the first place. Fritz Reiner Conducting The Chicago Symphony Orchestra 7. LSC 2456 LALO Symphonie Espagnole. Henryk Szeryng is at least the equal of the best of the other virtuosi who have recorded this piece, both in style and in effortless technique, and gives an enchanting, as well as breathtaking, performance.

But what makes me so sure of this record's superiority is its superb sound. Leopold Stokowski conducts Liszt, Enesco & Smetana selections. Stokowski imbues such diverse coloration and rhythmic insistence as to mezmerise on each listening. More than an historical document, these recordings could well become your favorite performances of these works.

Box Set made by CLASSIC RECORDS, in. Box Set released in 1994 - LONG OUT OF PRINT - everything is factory sealed & mint. Super Low Limited Edition Box Set Number: 0016 of only 500 made for worldwide sales.

The BOX Set and everything within are assumed to be in. As this set is FACTORY SEALED. NO splits/crushing, NO cut out marks, NO discoloration and NO tears in the shrink wrap - see pictures with this listing as most of them are of the actual item being offered.

A Short Note About LP GRADING. Mint {M} = Only used for sealed items. Near Mint {NM} = Virtually flawless in every way.

Near Mint Minus {NM-} = Item has some minor imperfections, some audible. Excellent {EXC} = Item obviously played and enjoyed with some noise.

Very Good Plus {VG+} = Many more imperfections which are noticeable and obtrusive. For best results, always thoroughly clean your LPs before playing them - even for brand new, sealed LPs. LPs can be audiophile quality pressings any collector of fine MFSL, half speeds, direct to discs, Japanese/UK pressings etc. Can attest to the difference a quality pressing can make to an audio system. Don't let this rarity slip by!!

This item is in the category "Music\Records". The seller is "hearthedifference" and is located in New York, New York.