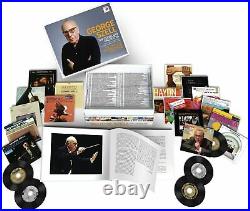 The first was "The Tale of the Tiger, " which was published in 1966. In 2013, sony Classical also released a 49-CD boxed set of major stereo recordings in Korea, "George Sell Edition, " but this is the first time in sony Classical's history that the "complete recordings" of Sell and the Cleveland Orchestra will literally be included in one set. The box contains all recordings made by Sell for Columbia and Epic labels over a 22-year period from 1947, when he succeeded Erich Reinsdorf as Music Director of the Cleveland Orchestra, to 1969, one year before his sudden death after a concert in Japan. The collection includes the following The collection also includes all of Sell's session recordings ever released by Columbia-Sony Classical (except for the 1970 live Tokyo concert), including mono recordings he made with the New York Philharmonic in the 1950s, chamber music recordings that stamp Sell's skills as a pianist, and Sell's narrations.

The monaural recordings, many of which are being released on sony Classical for the first time in the world on CD, are a combination of the original recordings and the new recordings. Beginning with five Dvorák: Slavonic Dances, a specialty of Sell's, the CD also includes symphonies from the standard repertoire by Haydn, Mozart, Beethoven, Schumann, and others, as well as a number of works by Columbia/Epic musicians active in the United States at the time, including Kazadz, Zelkin, Szigeti, Francescatti, Fleischer, and others. The album also includes a number of concertos performed with the label's most renowned soloists. These are the masterpieces of the stereo recordings that made Sell and the Cleveland Orchestra famous throughout the world.

In addition to the complete symphonies of Beethoven, Schumann, and Brahms, the program includes symphonies by Mozart and Haydn to Bruckner, Mahler, and Walton, major orchestral works from the 19th and 20th centuries, and works by Zelkin (Mozart, Brahms, Bartók), Kazadós (Mozart), Fry From the concertos with Beethoven, Brahms, Schumann, Grieg, and others, this collection captures the essence of the duo's art. Some recordings are made under the name of the Columbia Symphony Orchestra, a recording orchestra that mostly employs members of the Cleveland Orchestra.

Released after Sell's death, this live recording of Mahler: Symphony No. 6 from October 1967 is a valuable source that was converted from an FM broadcast recording.

For a long time, this was the only live recording of Sell and the Cleveland Orchestra performing together. This is a rare session recording made with the New York Philharmonic in the early 1950s, and is the world's first CD release on sony Classical. It includes repertoire that Sell never re-recorded during his Cleveland period, such as Smetana's "From the Woods and Meadows of Bohemia" and the overture to Weber's "The Magic Bullet". Recorded live at a special concert held in 1953 to commemorate the 25th anniversary of Horowitz's American debut, this monumental performance marks the final glow of Horowitz in his prime.

The performance is a monumental recording of Horowitz's final brilliance in his prime. The performance leaves a strong impression of Szell's baton technique, which responds beautifully to Horowitz's bold and uninhibited piano playing. This recording had been circulated as a pirated version for a long time, but in 2013, sony Classical released it as an official CD. A student of Richard Robert at the Vienna Conservatory, Szerkin was also an outstanding pianist who could play Mozart concertos and chamber music with ease.

This Mozart recording with the Budapest String Quartet and Druyan, who was the concertmaster of the Cleveland Orchestra, documents the musical richness of this "Pianist-Serl". It includes three Christmas songs recorded by Sell for Columbia Records' pre-order distribution record club, as well as Sell's narration. The dialogue with producer Paul Myers was originally included in the margins of Mahler's Symphony No. 6 and was previously released on CD as a bonus disc in Japan, but the other narratives were recorded for a not-for-sale LP called "AUDITION" that Columbia Records produced in the 1960s for promotional purposes.

This is the world's first CD release. Sell's lucid narration is the very music itself. The coupling is basically based on the Columbia and Epic first-issue U.

LPs, and the paper jackets use the jacket designs of the first-issue recordings, so you can hold in your hands the American-style artwork that reflects each era (designs authorized by the aesthetically demanding Sell). This is one of the key points of the box set.

The 1960s CBS artwork in particular is of great value in itself, with many excellent pieces by outstanding designers in the company's design department, such as Hanrietta Kondak. As for the remastering, the latest remasters are used on individual recordings. A large-format separate commentary will include a track listing with detailed recording data, as well as many different photos of the cellos. The manual and disc will be packaged in a beautiful box.

The disc will be housed in a beautiful box, making it a collector's item. Each CD is packaged in a paper jacket based on the original U. Hardcover with lots of photos and a separate all-color instruction manual. Box size: 27.9 cm (W) x 21.4 cm (H) x 16 cm (W x H) / 5.6 kg. International Buyers - Please Note. We do not mark merchandise values below value or mark items as "gifts" - US and International government regulations prohibit such behavior. In addition to the complete sy. The Complete Columbia Album Collection. This item is in the category "Music\CDs". The seller is "a-goods-japan" and is located in this country: JP. This item can be shipped to North, South, or Latin America, all countries in Europe, all countries in continental Asia, Australia.