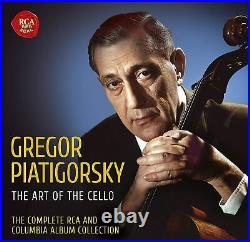 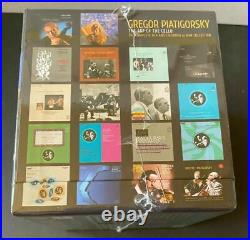 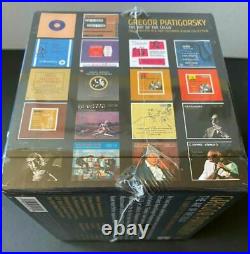 Brand new in shrink wrap. He has been called the greatest string player of all time.

His playing, which brought tears to the eyes of the immortal Fritz Kreisler, was noted for its exceptional technical control and wide range of expression. When Richard Strauss heard Gregor Piatigorsky perform with the Berlin Philharmonic, he exclaimed, Finally I have heard my Don Quixote as I imagined him. Sony Classical is pleased to announce a definitive release collecting Piatigorskys celebrated RCA and American Columbia recordings for the first time in a single edition. Most of the performances on the first half of the release, recorded between 1940 and 1947, have never before been transferred from the original analogue masters. Born in 1903 in Ukraine, Piatigorsky studied with his father before entering the Moscow Conservatory.

When only 15, he was invited to join Moscows foremost string quartet, the Lenin Quartet, and the same year he was appointed principal cellist at the Bolshoi. In 1921, he left the USSR to study in Leipzig with the renowned Julius Klengel, and in 1924 Furtwngler engaged him as principal cellist of the Berlin Philharmonic. During the prime years of his long and extraordinarily successful career, on both sides of the Atlantic, Piatigorskys interpretations were documented by Columbia and RCA. His famous version of the Dvork Cello Concerto with Charles Munch and the Boston Symphony Orchestra from 1960 possesses a strength, humanity and recreative fervor that never pall (Gramophone).

Piatigorsky formed chamber partnerships with many outstanding musicians of the era for example, with Artur Schnabel and Vladimir Horowitz; with Nathan Milstein, and with Arthur Rubinstein. Most important of all, was the collaboration with Heifetz, his closest friend. In 1961, after finally settling in Los Angeles, he and Heifetz established a famous chamber series. 36 CDs: 21 CDs (58%) are the complete Heifetz/Piatigorsky Concerts. Only 15 CDs do not involve Jascha Heifetz.

This is the fourth time the Heifetz/Piatigorsky Concerts have been issued on CD (the first time in 24bit/192kHz). For links to earlier editions, see Part 4 at the end of this review. Gregor Piatigorsky was born in the Ukraine, then part of Russia, in 1903. In the Twentieth Century, Ukrainian Jewish families produced more world famous "Russian" musicians than the rest of Russia (or the Soviet Union) combined: Vladimir Horowitz (Kiev), Alexander Brailowsky (Kiev), Benno Moiseiwitsch (Odessa), Nathan Milstein (Odessa), David Oistrakh (Odessa), Emil Gilels (Odessa), Leonid Kogan (Dnipropetrovsk) and Gregor Piatigorsky (Ekaterinoslav). He was there for the Berlin Philharmonic's first electrical recording in 1926: Beethoven Symphony 5 conducted by Furtwängler, plus recordings with Horenstein (Bruckner Symphony 7), Kleiber, Knappertsbusch, Pfitzner and Richard Strauss (unfortunately not Don Quixote), before leaving Berlin to pursue a solo career. EMI RECORDINGS NOT IN THE SONY BOX: In the 1930s, Piatigorsky was under contract to EMI (now owned by Warner).

Three famous pre-war recordings are not in this box: -- 1934 Schumann Cello Concerto with Barbirolli/London Philharmonic..- 1934 Beethoven Cello Sonata No. - 1936 Brahms Cello Sonata No.

1 with Arthur Rubinstein (Warner loaned it to Sony twenty years ago for the Rubinstein Edition, but not this time). For links to these recordings on CD, see Comment One (sort by "Oldest"). MISSING RCA RECORDING: BEETHOVEN SONATAS Piatigorsky emigrated to America in 1940 and signed a contract with Columbia Records. He switched to RCA in 1950, but a major RCA recording is missing from this box: Beethoven: Five Sonatas for Cello & Piano, recorded in 1954.

Gregor Piatigorsky was the main attraction: British pianist Solomon, on loan from EMI, was second-billed. RCA and EMI both agreed that these are the "Sonatas for Cello and Piano" (see photos 2 & 3).

Yes, I know these were originally published as "Grande Sonates pour Pianoforte et Violoncelle par Louis van Beethoven", but except for a few pedants, no one calls them that anymore (sorry pianists). Most recently issued on two Testament CDs. Beethoven: Cello Sonatas / Brahms: Cello Sonata No.

Maybe Warner could give us a box of all Piatigorskys EMI recordings? PACKAGING & SOUND 36 CDs in original jacket format, with an impressive 96 page booklet, but lacking an index to the individual works.

- Mono recordings: most have been newly mastered (at 24bit/192kHz) by Andreas K. - the Heifetz/Piatigorsky stereo chamber music remasterings appear identical to the 2016 Martin Kistner/Brett Zinn remasterings in the Jascha Heifetz Stereo Collection, but with one difference: The 2016 remasterings were 24bit/96kHz. The 2018 remasterings are 24 bit/192kHz. I didnt hear any improvement, but I dont have state-of-the-art audiophile equipment or state-of-the-art ears. - no bit rate claims are made for the non-Heifetz stereo material.

- in 2010 they were part of the massive 103 CD. Jascha Heifetz - The Complete Album Collection. There was an earlier version, but I cant find it on Amazon.

Jascha Heifetz - The Complete Stereo Collection Remastered. (four mono CDs are not included) In 1940, Jascha Heifetz, Arthur Rubinstein, and cellist Emmanuel Feuermann formed a piano trio which RCA billed as the Million Dollar Trio. Feuermann died in 1942, but the trio re-formed in 1949 with Gregor Piatigorsky as cellist.