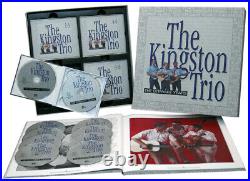 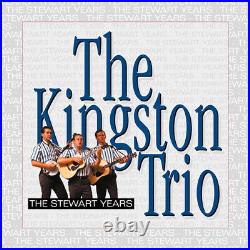 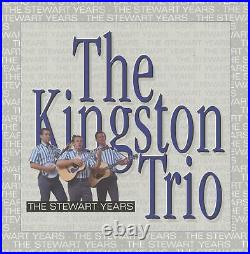 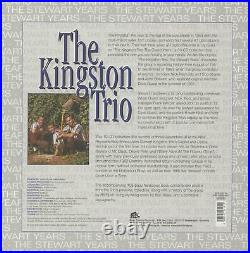 The Stewart Years (10-CD Deluxe Box Set). 10-CD Box (LP-Format) mit 108-seitigem gebundenem Buch, 286 Einzeltitel, Spieldauer 711:25 Minuten. Their first three years at Capitol Records is captured on'The Kingston Trio: The Guard Years,' a 10-CD collection that preceded the one you are holding in your hands. As the title implies,'The Kingston Trio: The Stewart Years' chronicles the group's recording history from August of 1961 to September of 1966, when the group consisted of original members Nick Reynolds and Bob Shane, and John Stewart, who replaced original member Dave Guard in the summer of 1961.

John Stewart had been a fan and contributing composer. When Dave Guard resigned, Nick Reynolds, Bob Shane, and group manager Frank Werber asked John to audition for the open spot. He was the perfect replacement for Dave Guard, and the perfect fit with Nick Reynolds and Bob Shane to continue the Kingston Trio's legacy as the most successful exponent of popular commercial folk music of all time. This 10-CD collection (the second of three) assembles all of the Nick Reynolds / Bob Shane / John Stewart Kington Trio's Capitol and Decca recordings for the first time.

It includes such classic hits as Greenback Dollar, Reverend Mr. Black, Desert Pete, and Where Have All The Flowers Gone? Along with many previously unreleased songs and unheard alternative versions (including their 1962 Grammy nominated album Something Special in its original form, without orchestral overdubbing).

It also includes their 1962 concert at the Hollywood Bowl, as well as their 1966 live'farewell' concert, Once Upon A Time. The accompanying 108 - page-hardcover book contains rare photos from the Trio's personal collection, along with a history of the group by Bill Bush, song-by-song notes by Ben Blake, and a complete discography. Don't You Weep, Mary. When My Love Was Here.

Take Her Out Of Pity. Nothing More To Look Forward To. Where Have All The Flowers Gone. Goin' Away For To Leave You.

All The Good Times Are Past And Gone. She Was Too Good To Me. Tell It On The Mountain. Some Fool Made A Soldier Of Me. My Lord What A Mornin. Honey, Are You Mad At Your Man. Ballad Of The Quiet Fighter. Softly As I Leave You.

Last Night I Had The Strangest Dream. No One To Talk My Troubles To. If You Don't Look Around. Let's Get Together (studio version).

Love's Been Good To Me. Love Comes A Trickling Down. Yes I Can Feel It. Gonna Go Down The River.

If You See Me Go. Where Are You Going Little Boy.

The Last Thing On My Mind. When You've Been Away For A Long Time. A Little Soul Is Born. The Spinnin' Of The World.

Babe, You've Been On My Mind. Ballad Of The Shape Of Things. Hard, Ain't It Hard. Walkin' This Road To My Town.

The World I Used To Know. The Ballad Of The Shape Of Things. When The Saints Go Marching In. Tomorrow Is A Long Time. A Day In Our Room. Dear customer, Based on our longtime experience, consignments to the U. Canada, Africa, Australia, and South America may take up to three weeks, depending on the target country's custom clearance policy, and local deliverers. Such consignments are rather cheap but can not be tracked!

Should you live in the U. Please, note that extra costs will apply. You must request for this extra service, prior to sending any funds. Thank you very much for your attention and cooperation, your Bear Family Records team. This item is in the category "Music\CDs".

The seller is "bear_family_records" and is located in this country: DE. This item can be shipped worldwide.