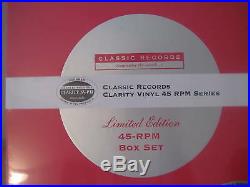 Classic Records has proven to be an Audiophile Company second to none in the new millennium. But ALL CLASSIC RECORDS TITLES ARE NOW OUT OF PRINT SINCE THE COMPANY WENT OUT OF BUSINESS IN 2010. These Editions have become some of the rarest pressings in the Audiophile Collector's Market.

Just try to find them at any Audiophile Retailer after the next few months. When you take that into consideration, what will this Audiophile Pressing will be worth in the years ahead? It could be one of the most collectible pressings ever especially since Classic records is no longer in business. How rare and valuable are each one of these titles now still Factory Sealed Priceless! Mymusicfix has a very limited amount of these now Rare Factory Sealed pressings.

We're sure you may not have known about some of these titles existed. Have fun collecting these Masterpieces! These are tremendous titles and artists that Mymusicfix still has in these LIMITED Edition STICKERS but we have very few pieces left of each title and prices will continue to rise as inventory continues to dwindle. Classic Records' newest formulation: CLARITY SV-P II CLEAR VINYL!

The genesis of the new formula came as a result of a visit to High End Audio's self proclaimed Vinyl Guru Michael Fremer's Analog Laboratory. Fremer demonstrated a Furutech LP demagnetizer. After using the demagnetizer, vocals had so much more texture, bass definition and clarity of every nuance of the recording was vastly improved and there was more low level information than we had ever heard in the recording.

Why did the demagnetizer had the sonic effects on a record? Very simply the carbon black that is ADDED to vinyl for LP manufacture contains trace metals that become randomly magnetized and interfere electrically with the cartridge hanging overhead during play. If carbon black and the trace metals contained therein caused playback distortion in the cartridge then why not take out the carbon black altogether? Classic Records Clarity SV-P II Clear Vinyl is the answer!

Clarity Vinyl represents the ultimate in vinyl formulations because it is comprised of over 90% percentage of the highest quality co-polymer available - a key component in vinyl pellets used for manufacturing vinyl records. Further, Clarity Vinyl has no carbon black additive, common in vinyl formulas for LP's. Carbon Black contains trace metals that become magnetized and cause "electrical distortions" in cartridges during playback that smears the sound. By taking out the Carbon Black, Classic Records is able to dramatically reduce the "electrical distortions" and thus bring more "Clarity" to the playback process, providing a more realistic musical experience to the listener and LP enthusiast. 45 rpm records have long been recognized as providing a higher fidelity musical experience resulting purely from the cartridge being able to extract more of the nuance from the complex vertical and horizontal groove modulations in stereo LP's. Further, Classic Records 45 rpm "single sided" pressings dramatically reduce the mechanical resonances created by the cartridge during playback by allowing these resonances to be more fully transmitted to and absorbed by the turntable platter. Classic Records Clarity Vinyl 45 rpm pressings are designed and manufactured to provide the "LOWEST DISTORTION" in every aspect of LP playback resulting in putting the listener as close to the music as possible. & TYPE IN 200G INTO THE SEARCH FIELD WITHIN OUR STORES SECTION AS YOUR PERSONAL CODE FOR ALL INDIVIDUAL TITLES + INFORMATION WILL APPEAR. 200 Gram Heavy Vinyl LP by Classic Records has been critically acclaimed as the finest and quietest ever produced. It is a new listening experience that will virtually make you feel as if you were in the studio. For hundreds of additional Rare, Out of Print, Factory-Sealed Audiophile Recordings, visit mymusicfix E-Bay Store by hitting the STORES TAB on this titles Home Page. LOUIS ARMSTRONG & DUKE ELLINGTON RECORDING TOGETHER FOR THE FIRST TIME 200 GRAM 45 SPEED 4 LP BOX.

Jazz mega giants Louis Armstrong and Duke Ellington collaborate on this stunning re-release on CLARITY SV-P II CLEAR VINYL! The Ellington band is superb and Louis just blows and sings to your heart's content. Transferred, for the first time, directly from the 3 track session masters. If you had to take one record to a desert island with you this would be one of the top choices.

Together for the First Time: Duke's Place 2. I'm Just a Lucky So and So 3. Do Nothin' Till You Hear From Me 6. Black and Tan Fantasy 8. Drop Me Off in Harlem 9. Mymusicfix has been told we have the best collection of Rare, Out of Print music collectibles on E-Bay.