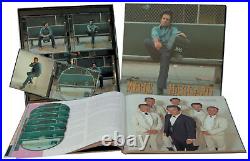 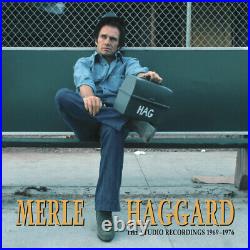 A true legend of American music captured in his prime! The follow-up to Bear Family's hugely acclaimed'Untamed Hawk' set. All the studio recordings between 1969 and 1976, including 15 straight #1 country hits.

Includes Vietnam era classics like Okie From Muskogee and The Fightin' Side Of Me, as well as the more moderate unreleased song Somewhere In Between. More than 20 other unreleased performances! Merle Haggard occupies a unique place in American music. The man who gave voice to the Silent Majority went on to become a counter-culture favourite. Ever since Bear Family released'Untamed Hawk' in 1995, we've been asked for a follow-up comprising the rest of his legendary Capitol recordings.

On 6 CDs, and it covers the tumultuous years between 1968 and 1976. The only exclusions are his Jimmie Rodgers tribute (already issued on a single CD by Bear Family) and the live recordings, which will be released in a companion volume. These were the years when Merle Haggard polarized the USA with songs like Okie From Muskogee and The Fightin' Side Of Me, yet, as this set reveals, his approach to politics was more nuanced than many thought at the time. In an unreleased song (one of many) titled Somewhere In Between he says I stand looking at the left wing, and I turn towards the right, and my eyes find both good and bad there on either scene.... He adds, I'm not too old to understand the young who disagree. The unissued recordings also include his original version of That's The Way Love Goes, which became a big hit for him on Epic Records several years later. These were Merle Haggard's golden years when he gave voice to the voiceless, and scored an unbroken string of #1 hits. This is American country music. I'd Rather Be Gone. I Die Ten Thousand Times A Day.

I Came So Close To Failure. The Sea Shores Of Old Mexico. If I Had Left It Up To You.

They're Tearing The Labor Camps Down. The Fightin' Side Of Me.

I Wonder What She'll Think About Me Leaving. I Ain't Got Nobody. One Row At A Time. I'll Be A Hereo When I Strike.

If You've Got Time (To Say Goodbye). I'm A Good Loser. I Can't Be Myself. I've Done It All. Worried, Unhappy, Lonesome and Sorry.

When The Feelin' Goes Away. The Only Truble With Me.

Big Time Annie's Square. You're The Only Girl In The Game. The Conversation Of Ronnie Jones.

It's Great To Be Alive. Someday We'll Look Back. Daddy Frank (The Guitar Man). Goodbye Comes Hard For Me.

The Man Who Picked The Wildwood Flower. You Don't Love Me (But I'll Always Care).

This Cold War With You. Recitation: The Proudest Fiddle In The World. The're Tearin' The Labor Camps Down. A Shoulder To Cry On.

Bring It Down To My House, Honey. Blues Stay Away From Me. Tired Of Your Understanding Ways. Hag's Dixie Blues #2. I Ain't Got Nobody (And Nobody Cares For Me).

Don't Let The Deal Go Down. I Forget You Every Day. I Know An Ending When It Comes.

I'm A White Boy. I Wonder Where I'll Find You At Tonight.

My Woman Keeps Lovin' Her Man. It's Not Love (But It's Not Bad). Somewhere To Come When It Rains. I Wonder If They Ever Think Of Me.

I'm An Old, Old Man Tryin' To Live While.. I'd Never Told On You. Big Bad Bill (Is Sweet William Now). If We Make It Through December.

I'll Break Out Tonight. Love And HOnor Never Crossed Your Mind. This Is The Song We Sing. There's Jut One Way.

The Emptienst Arms In The World. Come On Into My Arms.

Whit Man Singin' The Blues. Better Off When I Was Hungry.

Things Aren't Funny Anymore. That's The Way Love Goes. Got A Letter From My Kid Today.

Honky Tonk Night Time Man. A Man's Got To Give Up A Lot. The Girl Who Made Me Laugh. No More Trains I Ride. A King Without A Queen.

Old Man From The Mountain. You'll Always Be Special To Me. I've Got A Darlin' (For A Wife). These Mem'ries We're Making Tonight. The Coming And The Going Of The Trains.

My Love Affair With Trains. Where Have All The Hobos Gone. I Won't Give Up My Train.

When My Last Song Is Sung. Nothin's Worse Than Losing. The Roots Of My Raising. Living With The Shades Pulled Down. Let's Stop Pretending (Dirdy Old Hat Band).

It's All In The Movies. The Way It Was In'51. I Never Go Around Mirrors. A Working Man Can't Get Nowhere Today.

The Waltz You Saved For Me. What Have You Got Planned Tonight, Diana. Here Comes The Freedom Train. Dear customer, Based on our longtime experience, consignments to the U. Canada, Africa, Australia, and South America may take up to three weeks, depending on the target country's custom clearance policy, and local deliverers. Such consignments are rather cheap but can not be tracked! Should you live in the U.

Please, note that extra costs will apply. You must request for this extra service, prior to sending any funds. Thank you very much for your attention and cooperation, your Bear Family Records team.

This item is in the category "Music\CDs". The seller is "bear_family_records" and is located in this country: DE. This item can be shipped worldwide.