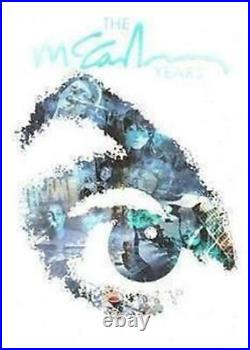 Please Note the Region Code DVD's will only play in players for this region or multi region players. Spanning four decades, The McCartney Years is a three-volume DVD collection of more than 40 music videos and over two hours of live performances. These films feature music that has become the soundtrack to our lives.

Volume One and Two contain the definitive collection of McCartney music videos all the way from Maybe Im Amazed in 1970 to 2005s Fine Line. The films can be viewed either in chronological order, in playlists personally arranged by Paul, or watched with his own commentaries recorded exclusively for this DVD. These are honest, witty, personal, at times sad and reflective, and reveal more than a few secrets. Volume Three showcases three classic live performances: ROCKSHOW filmed on Wings 1976 World Tour, new edits of Pauls seminal UNPLUGGED of 1991 and his triumphant, now legendary, headline performance at GLASTONBURY in 2004. The McCartney Years is packed with classic films, performances, little known gems from the McCartney vaults, archive interviews by Melvyn Bragg and Michael Parkinson which sit alongside alternative versions of the music videos and the full-length documentary Creating Chaos at Abbey Road.

Also included are the SUPERBOWL half-time show and Let It Be from LIVE AID. The menus feature yet more out takes from the archive. The collection has been meticulously restored and all films polished, re-graded and given a new lease of life in Widescreen format with re-mastered stereo and, for the first time, the original recordings re-mixed into 5.1 surround sound. All Items are ORIGINAL and Brand NEW. CDs & DVDs manufactured in Australia are often not plastic sealed or shrink wrapped.

All item posted strictly no collections. Most of our DVD titles are generally in PAL format and will work on all Australian & New Zealand Televisions and DVD Players (any exceptions to this will always be listed in the item description).

Many current Televisions and DVD Players are both PAL and NTSC compatible. S and Canada will need to ensure that their equipment is compatible (check manual). Powered by SixBit's eCommerce Solution.

The item "PAUL MCCARTNEY The McCartney Years Classic Beatles Songs Hey Jude +more 3DVD NEW" is in sale since Monday, May 11, 2020. This item is in the category "Movies\DVDs & Blu-ray Discs".

The seller is "wowmusicstore" and is located in NSW. This item can be shipped worldwide.