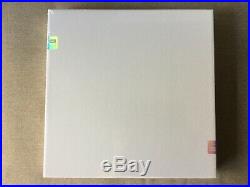 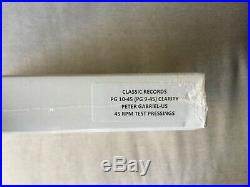 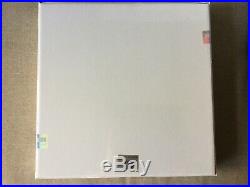 Catalog Number: PG 10-45 (Test Pressings are mis-scribed PG 9-45). This set consists of 5 single sided discs, for optimal sound performance, of the Classic Records 200gram reissue of. This title was planned, but never released as a 200g set at 45rpm on clarity vinyl, thereby making this an ultra collectible set. This test pressing box set has special significance and collectability because it comes from the Michael Hobson ARCHIVES. This is a truly one of a kind collectible of one of the most valuable and highly sought after Classic Records pressings.

These test pressings are from the first stamper and reflect the closest you can get to the lacquers, and hence have a special collectible value and store of value. Only a very small number of these unreleased sets exist and thus this is a special opportunity to hear your favorite title on Classic's 200g Super Vinyl Profile on Clarity Vinyl at 45 rpm - it doesn't get any better than this! This set is packaged in a white special edition box and each test pressing comes in a white jacket. 45 rpm records have long been recognized as providing a higher fidelity musical experience resulting purely from the cartridge being able to extract more of the nuance from the complex vertical and horizontal groove modulations in stereo LPs. Further, Classic Records 45 rpm single sided pressings dramatically reduce the mechanical resonances created by the cartridge during playback by allowing these resonances to be more fully transmitted to and absorbed by the turntable platter.

Classic Records Clarity Vinyl 45 rpm pressings are designed and manufactured to provide the LOWEST DISTORTION in every aspect of LP playback resulting in putting the listener as close to the music as possible. With only 5 Michael Hobson archive copies of this definitive reissue, don't hesitate before the price on the secondary market skyrockets!

From the start of Classic Records in 1994, Michael Hobson, insisted on having as complete a "personal archive" as possible, of all varieties and issues of Classic Records' various releases (180g, 200g, Blue Vinyl, etc) as a reference of what had been done. Still intact, in its entirety (with only a few holes) sits the Archive which will be offered exclusively on this shop by special arrangement with Michael Hobson. Each piece has an official Classic Records MH Archive Sticker on it and is accompanied by a certificate of authenticity hand signed by Michael Hobson personally to assure authenticity and enhance the collectibility over time.

Generally, only 5 numbered MH archive copies, most often from the first stamper, were added to the Hobson archive. In the case of popular titles, there are various versions because of the use of different plants (RTI, Bill Smith, Classic Pressing Plant) which offers the possibility to have comparisons of various machines the copies were made on - all of which sound different because of various vibrations from the different machines that are "pressed" into the vinyl. Yes, according to Hobson, you can hear the difference is machines among the various Test Pressings and production pressings for that matter.

Further, the Classic Records folklore is that Hobson, insisted on the best copies from the sweet spot of the pressing run for his personal archive of 5 numbered copies of each release! T is reported that Hobson personally selected the copies of the records that went into his archive by listening to 1st stamper pressings to determine when the stamper was in the sweet spot and pressing the best sounding records during the run. Further, these records have not been moved from Hobsons own climate controlled air-conditioned storage for all these years. This is not only a unique opportunity to own a piece of Classic Record's history but also the chance to have some of the best production pressings of Classic's various issues over time. Ridiculously collectible and likely a better investment than the stock market!

Background on Classic 200g Super Vinyl Profile. In 2003, Classic Records launched its now famous Signature Blue Note Mono reissue series. As part of that series Classic developed an "authentic" 200 gram LP profile that replicated that of an original Blue Note record from the 1950's. Comparing a test pressing on the new profile versus the same title on the normal 180 gram pressing it was discovered that the 200 gram version sounded significantly better.

The 200 gram pressing sounded louder, with more definition and solidity of notes across all frequencies and there was more detail - particularly low level detail like room or hall sounds, pages being turned, musicians whispering and automobile sounds outside the studio all became easier to identify. At first it was speculated inside Classic Records that the extra weight resulted in the better performance as no one could come up with a better answer given that the stampers were the same as well as the vinyl pellets used on both 180g and 200g pressings. One day, Michael Hobson, the founder of Classic Records was discussing this unexplainable sonic discovery with the Legendary Mastering Engineer and Sheffield Records founder, Doug Sax when Doug, without hesitation stated "Ah Michael you've discovered the difference in a flat versus conventional profile". Puzzled, Hobson asked for an explanation which Sax described as going all the way back to 1950's mono pressings and what happened when stereo records came out in the early 1960's. Sax explained that in the 1950's when mono records had no vertical modulation (only lateral), pressing PolyVinylChloride PVC (plastic) records were more easily pressed on "Flat Profile" dies fitted to the pressing machines since the grooves on the mono stampers were all the same height (no vertical modulation).

The new profile was "concave" rather than flat. When you put a flat stampers onto the concave dies the stampers distort and are no longer flat - the grooves are no longer perpendicular across the stamper and by association across a finished vinyl pressing. This new die profile created "back pressure" on the flowing vinyl and solved the "non-fill" problem with stereo pressings and resulted in higher yields which was great for pressing plants and good for record companies who wanted good prices on pressings. The problem was and still is that the new profile records don't sound as good as they could because they are not flat across their profile. Using a micrometer across the diameter of a 1950's mono records reveals that the thickness is virtually the same across the record's diameter from center label to outer edge but not so for a newer stereo profile pressing which is convex across its diameter resulting from the concave profile dies / distorted stampers.

This is the dirty little secret that Classic had rediscovered was known to old school experts like Doug Sax who founded Sheffield Labs in the 1970's. After the discovery, Classic Records never looked back and all of its releases and re-pressings after 2003 were on the new 200 gram Flat Profile dies that were specially made for Classic. Some years later Classic discovered that the very same profile was used by JVC in Japan to produce the legendary UHQR pressings for Mobile Fidelity which are well known to sound better than the conventional Mobile Fidelity pressings of the same titles - it all makes sense now. The long and the short of this is that Classic 200g Super Vinyl Profile (Flat Profile) pressings are as good as it gets for proper playback without groove distortion from non-flat pressings - Period. Background on Clarity Vinyl Pressings In 2008, Classic discovered that de-magnitizing black vinyl records leads to better sound in playback.