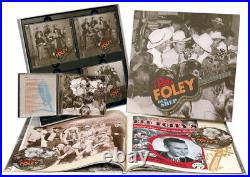 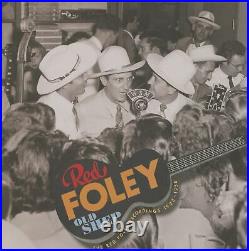 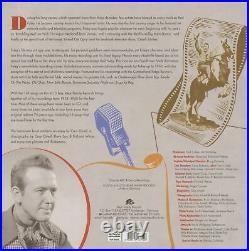 The hardcover book contains many rare and previously unpublished pictures. The set contains the ARC, Decca and the commercially never available World Transcriptions. During his long career, which spanned more than three decades, few artists have blazed as many trails as Red Foley.

He became country music's first'crossover' artist. He was also the first country singer to be featured on network radio and television programs.

Red Foley was hugely popular wherever he went, beginning with his years as'Rambling Red' on WLS Chicago's'National Barn Dance,' and continuing with the'Renfro Valley Barn Dance,' and finally as the genial host of the famed'Grand Ole Opry' and the landmark television show,'Ozark Jubilee. Red Foley's life was a tragic one.

In retrospect, his personal problems seem insurmountable, yet Red Foley's charisma and talent saw him through these troubled times; his many recordings are his finest legacy. Nearly every Nashville-based star of his stature has had his or her story told by now, everyone except Red Foley. This box set and hardcover book document Red Foley's remarkable recording career.

Included is every commercial recording made by Red Foley up to 1950, with the exception of his sacred and children's recordings. Featured are his recordings with the Cumberland Ridge Runners, duets with Lulu Belle and Ernest Tubb, and of course, his greatest hits, such as Chattanoogie Shoe Shine Boy, Smoke On The Water, Old Shep, New Jolie Blonde, Tennessee Saturday Night and Sugarfot Rag. With the 164 songs on this 6 CD box, Bear Family Records brings together all of his recordings from 1933 - 1950 for the first time.

Most of these songs have never been on CD, and many have not been available in any form since their original release 75 years ago, including 18 songs that are issued here for the first time. The hardcover book contains an essay by Cary Ginell, a discography by Cary Ginell, Dave Sax & Richard Weize and many rare pictures and illustrations.

Single Life Is Good Enough For Me. I Traced Her Little Footsteps In The Snow. Echoes Of My Old Plantation Home.

Going Out West This Fall (2). Little Black Moustache (Lulu Belle: vocal). Sing Me A Hill-Billy Ballad. A Rose And A Prayer. It Makes No Never Mind.

I'll Be Back In A Year (Little Darlin'). Where The Mountains Meet The Moon. I'm Looking For A Sweetheart. Will You Wait For Me, Little Darlin. When I Marry, I'll Marry For Love.

Have I Stayed Away Too Long. You Nearly Lose Your Mind. Don't Make Me Go To Bed And I'll Be Good. The End Of The World. There's A Blue Star Shining Bright In A... Hand Your Head In Shame. You Sang My Love Song To Somebody Else. That Silver Haired Daddy Of Mine.

They Cut Down The Old Pine Tree. I'll Never Let You Worry My Mind Anymore. One Little Lie Too Many.

Open Up That Door And Let Me In. A Pillow Of Sighs And Tears. Shame On You (& LAWRENCE WELK). Love To You Is Just A Game. Honey, Be My Honey Bee.

My Poor Little Heart Is Broken. Till The End Of Time. Have I Told You Lately That I Love You.

That's How Much I Love You. Easy To Please (& BETTY WADE). A Smile Will Chase Away A Tear. I'm Waltzing With A Broken Heart.

You're Just In Time To Be Too Late. I Found A Brand New Sweetheart In That... I Won And I Lost.

The Last Thing I Want Is Your Pity. My Broken Heart And I. I'm Picking Up The Pieces Of A Broken Heart. That Little Boy Of Mine.

Just A Man And His Dog. Everybody's Gonna Have A Wonderful Time Up.. I'm Throwing Rice (At The Girl I Love). Two Cents, Three Eggs And A Post Card. I Wish I Had A Nickel. Every Step Of The Way (& JUDY MARTIN).

Someone Else Not Me (& THE SUNSHINE TRIO). Good Morning Irene & E. The Lovebug Itch & E. Smoke On The Water #2.

Blues In My Heart (alt). A Smile Will Chase Away A Tear (alt). Chattanoogie Shoe Shine Boy (alt). Our Christmas Waltz (& JUDY MARTIN).

I Won't Be Home For Christmas. Dear customer, Based on our longtime experience, consignments to the U. Canada, Africa, Australia, and South America may take up to three weeks, depending on the target country's custom clearance policy, and local deliverers.

Such consignments are rather cheap but can not be tracked! Should you live in the U.

Please, note that extra costs will apply. You must request for this extra service, prior to sending any funds. Thank you very much for your attention and cooperation, your Bear Family Records team. This item is in the category "Music\CDs".

The seller is "bear_family_records" and is located in this country: DE. This item can be shipped worldwide.