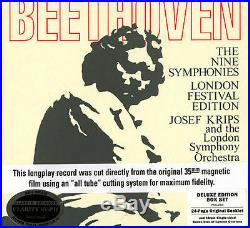 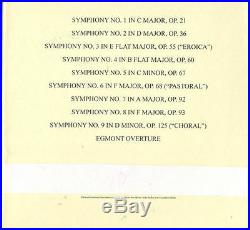 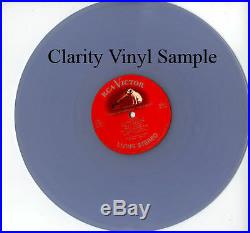 CLASSIC RECORDS/EVEREST SDBR 3065 Josef Krips/. Beethoven Nine Symphonies - 11LP Deluxe Box Set ONE LP only is a. 45rpm BONUS on 200g Clarity Vinyl. The Everest Recordings of the entire Beethoven cycle with Krips conducting the LSO are considered by many music critics to be utterly superb. Using the now famous 35 MM recording decks at Walthamstow Assembly Hall in 1959, Bert Whyte and team Everest captured in amazing detail, all the nuance and complexity of the Beethoven symphonies. NOW FOR THE FIRST TIME EVER using the original 35MM tapes to do the transfers reveals how truly wonderful both the performances and the recordings compare with other efforts by major labels of the same era. The deluxe LP set includes all nine symphonies spread over 10 discs and includes a bonus 45 rpm disc of the Egmont Overture. The LP's were mastered and cut on an ALL TUBE ANALOGUE cutting system BY Bernie "The Wizard" Grundman assisted by Len Horowitz running the 35MM tape machine.

All LP's are on Clarity 200g Super Vinyl Profile pressings to insure maximum playback fidelity. The discs come in a beautiful box that includes the original art from the extremely rare boxed set from Everest along with a XX page reproduction of the original deluxe edition booklet. This is an absolute must for serious Beethoven lovers! Amazingly majestic 35MM sound quality!

Background on Clarity Vinyl Pressings. In 2008, Classic discovered that demagnetizing black vinyl records leads to better sound in playback. The engineers at Furutech in Japan, makers of a commercial record demag machine, explained that the carbon black that was added to PVC record pellets contained trace metal that became randomly magnetized and while spinning below an electro-mechanical transducer (phono cartridge) caused electrical distortion inside a cartridge during LP playback. Hence, demagnetizing a black vinyl record dramatically reduces the electrical distortion and leads to more "Clarity" in playback.

Michael Hobson, founder of Classic Records reasoned that if the carbon black were removed then the result should be more Clarity in playback. Clarity Vinyl represents the ultimate in vinyl formulations because it is comprised of over 90% percentage of the highest quality co-polymer available - a key component in vinyl pellets used for manufacturing vinyl records. Further, Clarity Vinyl has no carbon black additive, common in vinyl formulas for LPs. Carbon Black contains trace metals that become magnetized and cause electrical distortions in cartridges during playback that smears the sound. By taking out the Carbon Black, Classic Records is able to dramatically reduce the electrical distortions and thus bring more Clarity to the playback process, providing a more realistic musical experience to the listener and LP enthusiast.

A Clarity vinyl pressing on a flat profile die is the absolute ultimate pressing possible and even a step above the JVC UHQR black vinyl pressings. Not to be missed - you can hear the difference!

The item "SDBR 3065 Josef Krips/LSO BEETHOVEN 9 SYMPHONIES 11LPs AUDIOPHILE CLASSIC RECORD" is in sale since Friday, March 29, 2019. This item is in the category "Music\Records". The seller is "lss1951" and is located in THESSALONIKI, GREECE. This item can be shipped worldwide.