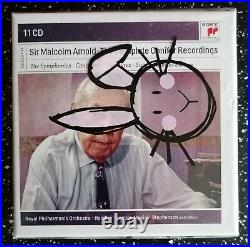 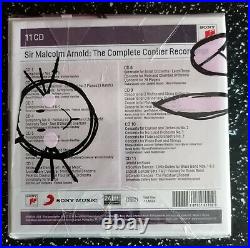 Sir Malcolm Arnold The Complete Conifer Recordings 11 CDs Symphonies Concertos. One of the most prolific British composers of the 20th century, Sir Malcolm Arnold remains best known for his phenomenal success in film (including an Oscar for his score for David Leans 1957 classic The Bridge on the River Kwai) and light music, a broad selection of which is included in sony Classicals new 11-CD anthology along with 11 concertos. This is a new unplayed box set with the original shrinkwrap. The heart of Malcolm's output, the works he regarded as his testament, are the nine symphonies, composed at fairly regular intervals between 1949 and 1986, with musical influences ranging from Holst and Vaughan Williams to Tchaikovsky, Mahler and Sibelius. Vernon Handleys recordings from the 1990s, many of them made in the composers presence, are a touchstone for this repertoire.

Sir Malcolm Henry Arnold CBE was an English composer whose works feature music in many genres, including a cycle of nine symphonies, numerous concertos, concert works, chamber music, choral music and music for brass band and wind band. His style is tonal and rejoices in lively rhythms, brilliant orchestration, and an unabashed tunefulness. He wrote extensively for the theatre, with five ballets specially commissioned by the Royal Ballet, as well as two operas and a musical. He also produced scores for more than a hundred films, among these The Bridge on the River Kwai, for which he won an Oscar. A Grand, Grand Overture Concerto for 2 Pianos Op.

Carnival of Animals Opus 72. Fantasy on a Theme of John Field.

Fantasy for Oboe 1 Concertino for Oboe and Strings, op. A Flourish for Orchestra Op. Concerto for Viola and Chamber Orchestra. Concertos for 2 Violins and String Orchestra.